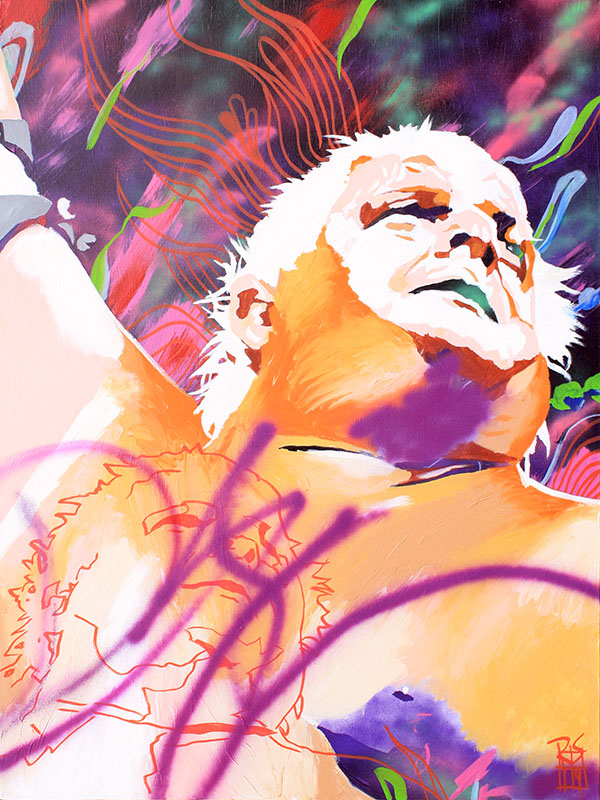 Dusty Rhodes is one of the most beloved men to ever step into a professional wrestling ring. Born Virgil Runnels, Jr in 1945 Texas. After overcoming osteomyelitis in his hip when he was six, he made his pro wrestling debut in 1968. He achieved early notoriety in Minnesota’s American Wrestling Association teaming with ‘Dirty’ Dick Murdoch as The Texas Outlaws. He broke off as a fan-favorite singles wrestler in 1974 in the Florida territory of the National Wrestling Alliance after turning on his villainous tag team partner Pak Song in a match against Eddie and Mike Graham. He soon gained the nicknames of Stardust, the White Soul King and the one that stuck, The American Dream. He became a staple of the NWA territories, primarily in Florida and Georgia, where he would also occasionally compete under a mask as the Midnight Rider.

In the early 1980’s he began working for Jim Crockett Promotions, later World Championship Wrestling, where he had a fondly-remembered tag team with Magnum T.A. The duo tore the house down on numerous occasions competing against teams like The Russian Team (Ivan Koloff, Nikita Koloff and Krusher Khruschev) and most famously The Four Horsemen (Ric Flair, Arn Anderson, Ole Anderson and Tully Blanchard) before Magnum’s career was ended by a car wreck. After a brief partnership with Hawk and Animal, The Road Warriors, he had notable singles feuds with legends like Abdullah the Butcher, Terry Funk, Kevin Sullivan, Blackjack Mulligan, Harley Race, ‘Superstar’ Billy Graham, Ric Flair and Tully Blanchard. During this time he won the NWA World Heavyweight Championship three times, twice from Race and once from Flair. His work against Flair and the Horsemen is widely considered one of the best feuds in the history of the sport, both for the in-ring work and for the heated promos between the two. It was during this time Dusty cut the infamous ‘Hard Times’ promo, that’s a a benchmark for what a wrestler can do with a microphone.

In 1985 Rhodes became a booker for Crockett, leading to him being credited with inventing the names and many types of matches such as the famous War Games. A match ending in controversy after a referee has been knock unconscious being called a ‘Dusty Finish’ is also named after him. After being fired from WCW in 1988 for allowing blood to be shown on TV, he landed with the World Wrestling Federation as the ‘Common Man’ Dusty Rhodes. He was put in an absolutely ridiculous polka-dotted singlet and matching headband, but his overpowering charisma and abilities in the ring still led him to be a fan favorite, and he had notable rivalries with ‘The Macho Man’ Randy Savage and ‘The Million Dollar Man’ Ted DiBiase. He left in 1991, ending his career as a full-time in-ring competitor.

He returned to WCW as a part of their booking committee and managed Ron Simmons during his historic victory over Vader for the WCW World Heavyweight Championship, as well as sitting in with the announce team. By this time his son Dustin was an active competitor, and in 1994 Dusty returned to the ring to fight alongside his son in a tag match. When the New World Order faction invaded WCW, he was initially fighting against them, but soon joined as the manager of Scott Hall and Kevin Nash after turning on Larry Zbyszko.

After leaving WCW again, he briefly competed in Extreme Championship Wrestling to put over Steve Corino. He then joined Total Nonstop Action Wrestling in 2003 as head booker and as an occasional competitor until leaving the company in 2005. During this time and through 2006 he also took independent bookings, competing against the likes of Jerry ‘The King’ Lawler, Gangrel, Kamala, Chris Candido, Mil Mascaras, Dos Caras, and Terry Funk.

In 2005 he began appearing again for the WWE, notably to support his son Cody Rhodes who had begun competing there, and also having a brief feud with Randy Orton. He currently works there as the head writer and creative director of their NXT Wrestling program, which functions as the developmental territory for WWE and building the superstars of tomorrow. I personally think that NXT is the very best wrestling show being made today. Near the end of 2013 he appeared in the corner supporting both sons Dustin ‘Goldust’ Rhodes and Cody Rhodes when they defeated Roman Reigns and Seth Rollins to become the new WWE World Tag Team Champions. At 68 years young, he is still actively guiding the course of the professional wrestling world both behind the scenes, through his accomplished sons Dustin and Cody, and even on-camera. Truly an inspiration.

About the piece: I first laid down a layer of black house paint on the background, and lightly sprayed over it with a few colors of paint, followed by a bit of red and pink paint and laid down some lines with paint markers. I then applied the paint directly to the canvas for his torso and mixed it right there, mostly with my fingers. After rendering the head, I felt like the torso area was creating a dueling negative space against the background, which I didn’t want. I drew his face again on that area with a red paint marker, creating a bit of symbolism about how he has transcended the confines of his own flesh into the stuff of legend. As lofty as that sounds, it still didn’t feel right visually, so I finished it off by painting his signature with some violet spray paint and voila: My first painting of 2014!