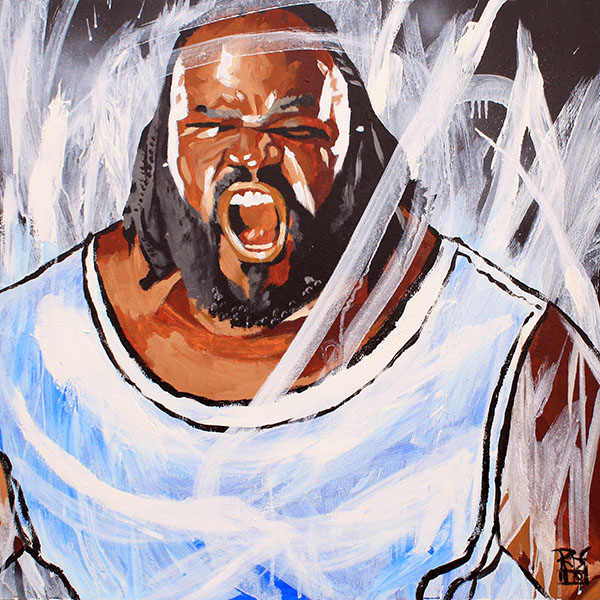 Mark Henry is one of the most physically legit athletes to ever cross over into professional wrestling. A naturally huge human being, the native Texan began competing in weightlifting during high school, quickly setting records, winning the National High School Powerlifting Championships in 1990, and being named “the world’s strongest teenager” by the Los Angeles Times. After graduation, Mark began to seriously train both in powerlifting and Olympic-style weightlifting. At age 19 he qualified for the 1992 Summer Olympics, finishing at 10th place in the super heavyweight class. By 1997 he went on to win 13 first place championships in various national weightlifting competitions and placed Gold, Silver and Bronze in the 1995 Pan American Games. In 1995 he rocked the powerlifting world by winning the ADFPA US National Powerlifting Championships with an unheralded 2314.8 pound raw powerlifting total, doing so without supportive equipment, and beat the second-place lifter by 286 pounds. Leading into the 1996 Summer Olympic Games he quickly became a celebrity, being interviewed by the likes of The Today Show, HBO Inside Sports, Jay Leno, Conan O’Brien and Oprah Winfrey, as well as piles of magazines getting photographed by Annie Liebowitz. Mark was the largest athlete in history to compete in the Olympics and was voted the captain of the Olympic weightlifting team. Henry was unfortunately injured during the competition, and was unable to perform at his normal levels. Though he had originally planned to continue with his powerlifting competitions, he soon put his focus on professional wrestling after signing an amazing 10 year contract with the then-WWF. He set over a dozen official competition powerlifting records and three official personal weightlifting records, making him the legitimate strongest man in the world.

Mark Henry debuted with the WWE in 1996, entering into a feud with Jerry ‘The King’ Lawler. In 1998 he joined the Nation of Domination along with Ron ‘Farooq’ Simmons, The Rock, Kama Mustafa and D’Lo Brown. After the group disbanded, he had a short feud with The Rock before forming a tag team with D’Lo Brown. He then turned on Brown to join forces with Jeff Jarrett to be awarded the European Title. Later, he evolved into the Sexual Chocolate character where he was involved in my all-time favorite storyline. He began a relationship with Mae Young, who it was believed he had impregnated, but instead she delivered a rubber hand. Seriously.

In 2000 he began training for the Arnold Strongman Classic, where in 2002 he went on to win in record time and setting at least one lifting record, proving again that he was indeed the strongest man in the world. He then returned to WWE to the SmackDown! brand, having feuds against Chris Jericho and Christian. In 2003 he returned to the Raw roster, having brief rivalries with Goldberg, Shawn Michaels, and Booker T. He switched back to SmackDown in 2005, beginning a program with Batista and then a sustained one with Kurt Angle. He was defeated by The Undertaker at WrestleMania 22 in a casket match.

In 2008 he was drafted to the ECW brand, where he defeated Kane and the Big Show to win the ECW Championship, and became a monster champion. He later lost the belt to Matt Hardy. Back on Raw in 2009 he began teaming with MVP to face Chris Jericho, Big Show and Miz in different combinations. In 2011 he began inducting opponents into his ‘Hall of Pain’ after decimating them through sheer acts of power, violence and brutality. He took out the likes of the Big Show, Kane, Vladimir Kozlov and the Great Khali in a matter of weeks. He then set his sights on Randy Orton and the World Heavyweight Championship, defeating the Viper at Night of Champions. Following this the Big Show returned, leading to a King Kong versus Godzilla level battle that left the ring collapsed under the weight of their savagery. At the close of the year Big Show finally defeated Henry, but then Henry knocked out Show, allowing Daniel Bryan to cash in his Money in the Bank contract. Henry and Bryan entered into a feud, and later Mark would face off against Sheamus and CM Punk. In 2013 he teased retirement, but was actually just using that to distract John Cena and the two entered into a rivalry.

About the piece: I wanted to equally showcase Mark’s intimidation factor and his appearance. I first painted the background black, then lightly spritzed it with white spray paint. I followed that with thick swipes of watered-down white paint. I painted the figure, then added more chunky swipes of white to both create a chaotic energy but to also frame his face.