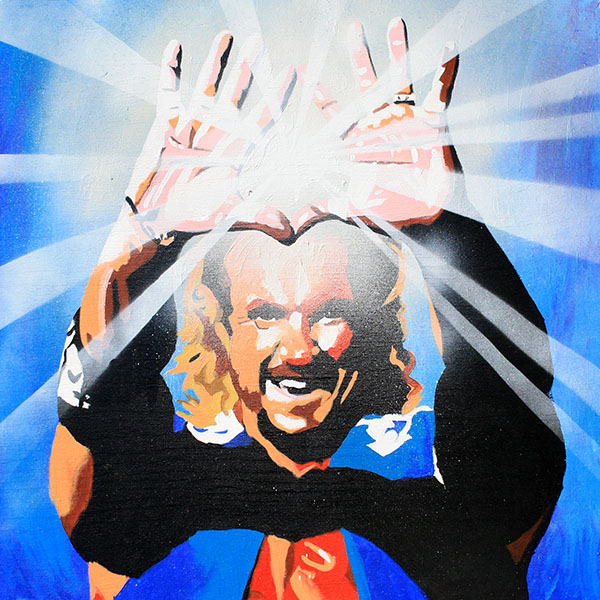 Diamond Dallas Page is one of the few men to have become almost more well-known for his exploits after his wrestling career than during it. And he had a huge career in wrestling! DDP debuted as a manager in the AWA, associated with future world champions like Pat Tanaka and Curt Hennig. After a few months there, he was signed with WCW, again mostly working as a manager. There he managed the likes of the Freebirds, Scott Hall, Kevin Nash, Raven and other notables. Page continued his wrestling training and was soon working as a competitor himself. He had a long and memorable feud with Randy Savage during the early days of the NWO, before eventually turning heel. DDP also partnered with many celebrities such as Karl Malone and Jay Leno, raising his profile both with the fans and with the company. DDP went on to have the WCW World Championship three times before the company was bought by Vince McMahon.

DDP’s tenure with the WWE is largely remembered for his rather creepy feud with the Undertaker, and his later catch phrases “It’s me, it’s me, it’s…D…D…P!” and “That’s not a bad thing…that’s…a good thing!” Injuries and the tolls of time finally caught up with Dallas and led to his retirement from the ring.

During his last years in the business, Page started getting heavily into yoga, first with his book ‘Yoga for Regular Guys’ and his mega-popular ‘DDP Yoga’ DVD series. In the last year, DDP Yoga became an international sensation based around the inspirational story of Arthur Boorman. Boorman was nearly paralyzed and unable to walk unassisted. It was his experience with the DDP Yoga program that led to him losing 140 pounds in ten months and not only being able to walk unassisted, but run! Look up the video on YouTube and see if you can watch it without getting a tear in your eye!

About the Piece: I did this in several stages. First I painted the blue background, then sprayed the white cloud around the hands. I then painted the face and torso, and again sprayed a white cloud around the hands, creating a glowing effect. I followed that up with painting the arms and hands, then another smaller white cloud. I then cut out a stencil for the rays of light emanating from DDP’s ‘Diamond Cutter’ symbol.