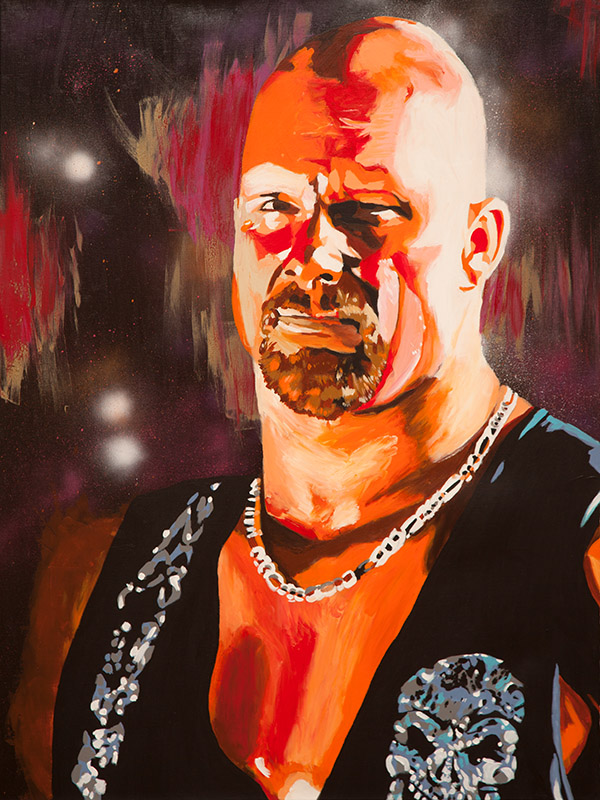 Stone Cold Steve Austin is arguably the most successful wrestler in the history of professional wrestling. With my other Champions Collection pieces I normally give you a short bio about the subject, but what am I really going to tell you about him that you don’t already know? Born Steve Williams, trained by ‘Gentleman’ Chris Adams, he was given the name of Steve Austin right before debuting for the USWA by Dutch Mantell right before going out to the ring, since they already had Dr Death Steve Williams working there. He went on to singles success in WCW as well as a notable tag team run with Flyin’ Brian Pillman as The Hollywood Blondes before getting let go. He had a short but memorable run in ECW before debuting with the then-WWF as The Ringmaster. That gimmick was dropped in favor of ‘Stone Cold’ Steve Austin, who rocketed into the stratosphere after beating Jake ‘The Snake’ Roberts in the King of the Ring and cutting the infamous promo, “Talk about your psalms, talk about John 3:16…Austin 3:16 says I just whipped your ass!” He feuded with The Rock, The Undertaker, Shawn Michaels, and most memorably Vince McMahon. He’s since gone on to star in several movies and host numerous TV shows. But again, you already know all of this.

I’m going to be selfish this time around and talk more about the making of the painting. I did this live outside of the 2014 SummerSlam Confidential Panels and SummerSlam itself. One, it was great doing live art in Los Angeles. That’s a big thing for any artist. Two, I love talking with all of you who come out about art and rasslin’. Three, that Sunday was my wife’s birthday, so I got to treat her to that trip. And finally? Showing the painting to the man himself, who has been an awesome supporter of what I’m doing pretty much from day one. He’s just as cool in person as you hope he is. He had warned me ahead of time that if I screwed this up, he’d give my ass a stunner, so I guess I did a good job! Thanks again to WWE for having me out, Austin for his time, and to all of you who support me and have made my life so incredible!

About the piece: Since I was going to be painting around people, I prepped the background first in the studio. I laid down a layer of black paint, then went over that with a light dusting of spray paint and some swipes of oil. Then out in LA, I got to work on the figure, painting the torso first, then the vest and its details. I finished up with the face, working dark to light and layering up the acrylics to give it more of a three-dimensional feel. Not bad!