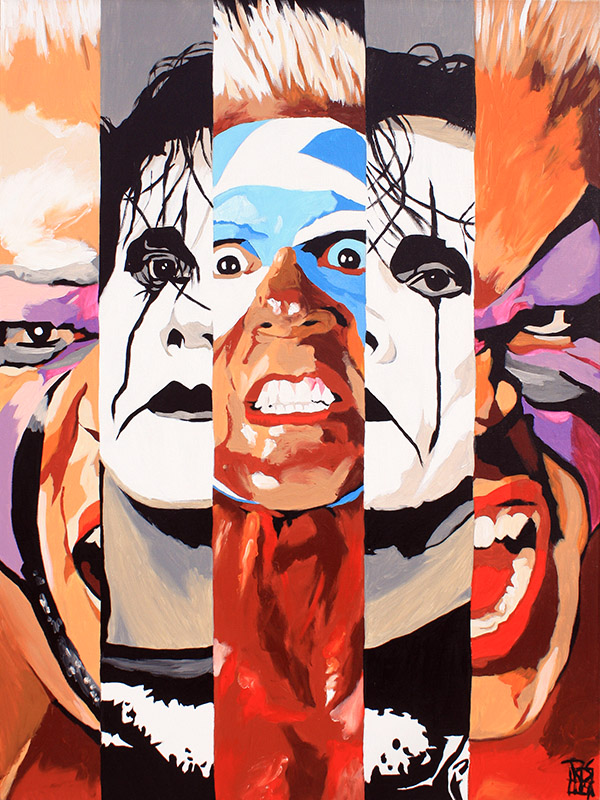 On the short list of the biggest names in the history of professional wrestling, you will find the name of the man called Sting. Born Steve Borden in 1959 Omaha, Nebraska, he soon gravitated to the world of bodybuilding. His amazing physique soon saw him partnered with Jim Hellwig, the future Ultimate Warrior. The duo, with Borden as Flash and Hellwig as Justice were called Power Team USA, and soon rebranded as the Blade Runners, where Flash became Sting and Justice became Rock. They worked in Memphis from 1985-1986 and later for Bill Watts’ Universal Wrestling Federation. Hellwig soon left to pursue his own career, and Sting soon began teaming with Eddie Gilbert and then with Gentleman Chris Adams. When Crockett Promotions purchased the UWF, Sting then began working for them and got his exposure on a national level with World Championship Wrestling.

In 1988 he soon entered into a legendary rivalry with Ric Flair. He also had a notable tag match with Dusty Rhodes against the Road Warriors. The following year he had a brutal feud with The Great Muta. By the end of 1989 he found himself teaming with Ric Flair to face off against Muta and Terry Funk and joining the Four Horsemen.

Going into 1990, Sting had won a number one contender spot for Flair’s National Wrestling Alliance World Title, bringing dissension into the Horsemen ranks. This saw Sting battling with the other members before defeating Flair for his first World Championship in July. Over the next few years he cemented his place as the ‘Franchise of WCW’ by continuing to face off in memorable matches against Flair, teaming with Lex Luger, and elevating talents like Steve Austin, Vader, Mick Foley, Rick Rude, and teaming with the new-to-WCW Hulk Hogan.

In 1996 he was one of the first WCW competitors to stand up to the Outsiders Kevin Nash and Scott Hall, facing off against them at the historic Bash at the Beach ’96 where the third member was revealed in Hulk Hogan, setting up the formation of the New World Order. He soon began transforming his customary colorful face paint and ring attire to a look more inspired by the movie The Crow, sporting all black, jet black hair, and white face paint. For a year he did not say a word, and mostly just watched the matches from the rafters.

In early 1997 he finally began striking against members of the nWo, setting off one of the most exciting rivalries in wrestling history. He would repel from the rafters during moments when wrestlers were getting beat down by the nWo, driving them off with his black baseball bat. By the end of the year he finally returned to in-ring competition when he faced off against Hogan and defeated him for the WCW World Heavyweight Championship.

As the nWo storyline ran its course, Sting had rivalries with Diamond Dallas Page, Goldberg, Sid Vicious, Randy Savage, Jeff Jarrett, and Scott Steiner. When Vince McMahon bought out WCW in 2001, Sting opted to let his contract expire and not join the WWE.

After competing overseas the next couple of years, he joined Total Nonstop Action, helping the fledgling company find its footing. There he competed against Jeff Jarrett, Scott Steiner, Christian and others before winning his second NWA World Heavyweight Championship in 2006, 16 years after his first win. He soon lost it to Abyss. He soon entered into a program with Kurt Angle, then Samoa Joe, Christopher Daniels, AJ Styles, and more. Sting became a mainstay of TNA, helping many younger talents to get established. Sting parted ways with TNA in 2013.

In 2014 Sting started working with WWE on some documentary projects. With such a storied past, it’s very telling that the future is still wide open for The Icon.

About the piece: I wanted to capture Sting’s different looks in this painting, so I opted to ‘fracture’ it with vertical panels showing his more colorful ‘Surfer’ look as well as the ‘Crow’ look. I did it all with acrylics, first the colorful areas and finishing with the black and white sections.