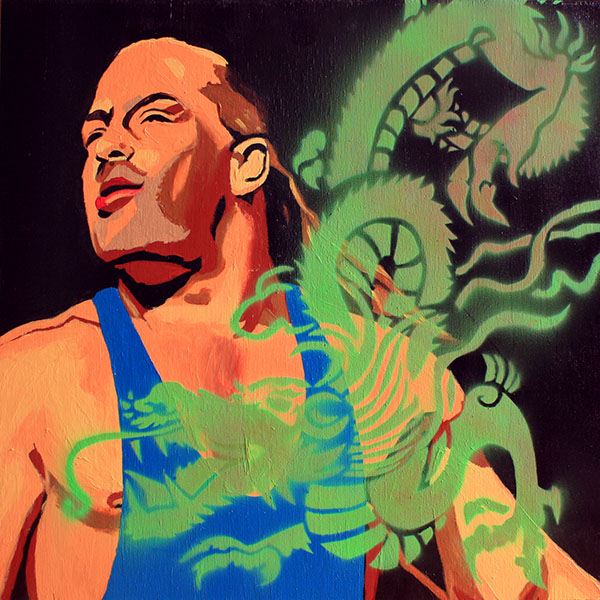 Rob Van Dam is one of those guys who on paper just shouldn’t work, but fans worldwide will tell you otherwise. A guy in an airbrushed singlet who kind of looks like Jean-Claude van Dam and uses sorta-kinda martial arts in his moves? Shouldn’t work, right? But the guy will have entire arenas chanting ‘RVD’ as soon as he walks through the curtain. Born in Battle Creek, MI (really!) as Robert Szatkowski, RVD made his first wrestling appearance at the age of 16 as one of the kids forced to kiss the Million Dollar Man’s foot for $100 (Google it). After being trained by the original Sheik, he soon debuted in 1992 for WCW as Robbie V. His time there was unremarkable, and was soon back on the Independent circuit and making a name for himself in Japan. It was in 1996 that things started clicking for him when he signed with ECW as RVD, a laid-back stoner with a martial arts-influenced and offbeat style.

In ECW, he had many memorable rivalries with the likes of Sabu, Bam Bam Bigelow, Jerry Lynn, and really all of the notable names of that promotion. He was the longest-reigning ECW World Television Champion, holding the strap for an astounding 700 days. It was there that he became known as ‘The Whole F’n Show’ by the fans, who would chant that during many of the spectacular moves he would make in the ring.

After ECW’s folding, he debuted in the WWE as a part of the ECW/WCW Invasion angle where he had a great feud with Jeff Hardy and quickly became one of, if not the most over member of the Invasion. Once that storyline was completed, he would go on to have singles feuds with William Regal, Eddie Guerrero, Brock Lesnar and Triple H. He would later join with Kane as a dominating tag team before the two would feud. Van Dam would then win the Money in the Bank title shot, using it against John Cena at the ECW One Night Stand event to win the title. When the ECW brand was brought back under WWE, RVD was christened the new ECW World Champion, but also held onto the WWE Championship, becoming the only wrestler to hold both. He would soon lose both before leaving the company in 2007.

After a stint back on the Independent circuit, he would join TNA Impact in 2010 where he would soon win their World Title. He had many feuds there against AJ Styles, Abyss, Christopher Daniels, Zema Ion, Austin Aries, Kenny King, and others. His contract with TNA is rumored to have expired recently, so it’s up in the air where we’ll see him next.

About the piece: I painted RVD’s figure straight-up in acrylics, and then cut out a stencil of the dragon making its way into his singlet. RVD’s ring gear is always interestingly airbrushed and I wanted to play on that with the stencil painting.