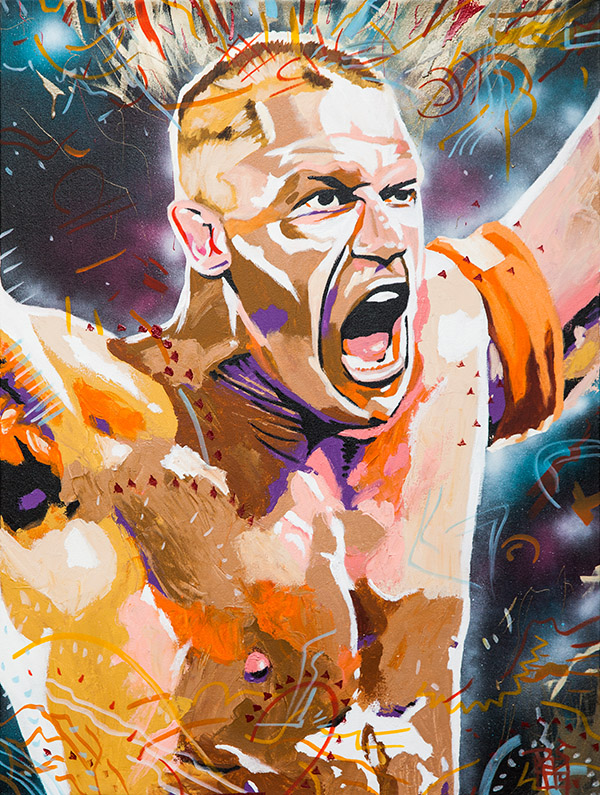 Certain eras of wrestling are defined by just one man, and for the last ten years that man has been John Cena. Born in 1977 in West Newbury, Massachusetts, he attended Springfield College in Springfield, Mass. where he competed as a Division III All-American center for their football team. After graduating in 1998 he pursued a career in bodybuilding, which soon led to training as a professional wrestler in 1999. He was trained at Ultimate Pro Wrestling’s Ultimate University by Rick Bassman in California, and competed for UPW as The Prototype. In 2001 he entered WWE’s developmental territory Ohio Valley Wrestling. One year later he made his debut on the main roster under his real name against Kurt Angle, answering an open challenge, instantly becoming a fan favorite. He went on to feud with Chris Jericho, and then teaming with Billy Kidman.

After a loss, Cena turned on Kidman, becoming a heel and really igniting his character’s path. He soon started cutting freestyle rap promos in the ring that were a regular highlight of the show. In 2003 he began chasing Brock Lesnar for the WWE Championship, but was ultimately unsuccessful. He finished the year out by turning back to a fan favorite, largely due to the crowd connecting so well to his promos. At 2004’s Royal Rumble he began a feud with The Big Show which culminated at WrestleMania XX with Cena applying his FU finisher to Show in an amazing feat of strength, winning him the United States Championship. He went on to feud with Booker T and Carlito before entering a serious program against John Bradshaw Layfield, which culminated with Cena winning his first WWE Championship at WrestleMania 21. He then debuted on Raw after the draft to a thunderous response from the crowd, and feuded again with Chris Jericho. During this, and growing quite a bit during the subsequent program with Kurt Angle, parts of the crowd would loudly boo and jeer Cena, while the other part stayed fiercely loyal. Instead of turning him heel, he has stayed a face since, and continues to get this incredibly unique reaction from every crowd.

He soon entered into a fantastic and possibly career-defining rivalry with Edge, after Edge cashed in his Money in the Bank contract to defeat Cena following a grueling Elimination Chamber match in 2006. He then competed against Triple H in a series of matches culminating at WrestleMania 22. He then faced off against Rob Van Dam in a memorable match at ECW One Night Stand, with the crowd quite seriously threatening to riot if Cena won against RVD (RVD won, by the way). Cena and Edge then resumed their rivalry in a series of memorable matches. John went on to feud against the likes of Umaga, Shawn Michaels, and the Great Khali before his next great antagonist, Randy Orton. The chemistry between Cena and Orton, and the way that the duo really defined their generation, became one of those violent pairings that explodes every time they get in the ring together.

Cena suffered a serious injury at the end of 2007 requiring surgery and time off, and then made a huge surprise return at the 2008 Royal Rumble, which he went on to win. He then faced off unsuccessfully against Orton and Triple H at WrestleMania 24. Following this he had another brutal program against JBL and another against Chris Jericho before beginning a notable feud with Batista in a series of memorable matches. In 2010 he had a long rivalry with The Nexus, a group of young wrestlers led by Wade Barrett. This was followed with a program against The Miz culminating at WrestleMania 27. The next night Cena challenged The Rock to return to wrestling and face him at the next year’s WrestleMania, which Rock accepted. This was interesting, as their feud was largely carried out online and in promos over the course of the year. This led to an enraged CM Punk challenging Cena for the title at Money in the Bank, with Punk winning and then leaving the company with the title. Cena won a match against Rey Mysterio for the vacant title, which led to Cena and the returning Punk facing off at SummerSlam to unify the title. He then had a program with Alberto Del Rio, followed by Miz and R-Truth, Mark Henry, and Kane before facing off against Rock at ‘Mania.

Cena then had an incredibly brutal match with the returning Brock Lesnar. He went on to face the Big Show, CM Punk, Ryback, and Dolph Ziggler before again facing off against The Rock at WrestleMania 29. Following this he had some amazing matches against Daniel Bryan, helping to establish Bryan as a legitimate force in the world of wrestling. Near the end of 2013 as the World Heavyweight Champion he challenged WWE Champion Randy Orton to a title unification match, which saw Orton win in an incredibly violent fashion in a tables, ladders and chairs match. Cena has now entered into a phase in his career where he’s the proving ground for up and coming talent such as Bray Wyatt who he will face this Sunday at WrestleMania XXX.

Outside of the ring, Cena has starred in multiple movies, released a rap album that debuted at 15 on the Billboard chart, and most importantly has granted over 400 wishes for the Make-A-Wish Foundation. He also is heavily involved in WWE’s efforts with the USO, many anti-bullying efforts and Susan G Komen for the Cure. He’s known at the hardest-working wrestler in the business, both for his road time and all of his efforts outside of the show. He has held the WWE Championship a record 11 times and was World Champion 3 times, and continues to be a draw wherever he appears.

About the piece: I first put down a layer of black paint for the background, then some spritzes of spray paint. I followed that up with the ‘crown’ of paint, then used acrylic for the figure. With that dry, I used a paint marker for the energetic lines swirling around him and then dipped the side of a wedge of foam in red paint for the little triangles. Word life, it’s basic thuganomics.