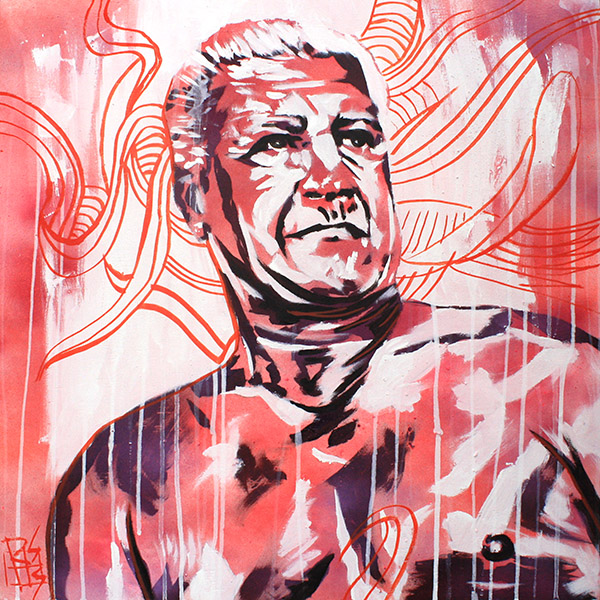 Classy Freddie Blassie is my favorite kind of villain in the world of professional wrestling. Frederick Kenneth Blassie was born on February 8, 1918 in St. Louis, MO, the only son of two German immigrants. His father was an abusive alcoholic, creating an environment where he grew up seeing the worst that a man can say and do. Vowing to not follow his father’s path, he never touched a drop of alcohol and focused his natural talents and stature first to boxing and then pro wrestling. When the United States entered World War II, he enlisted in the Navy and spent 42 months battling in the Pacific theater. Upon returning from the war, he was billed as ‘Sailor’ Fred Blassie on the East Coast, and was managed for a time by the Fabulous Moolah.

Blassie worked for the World Wrestling Association from 1952 to 1953, mostly tagging with Billy McDaniel. From there he worked in the Georgia territory of the National Wrestling Alliance, where he soon won the NWA Georgia Southern Heavyweight Championship. During this time he fully embraced the heel aspect of his character, as the fans saw him as a Yankee. He bleached his hair like Gorgeous George and Buddy Rogers, and started biting his opponents and filing his teeth during interviews.

In 1960 he returned to the WWA in Los Angeles as a top villain, having main event feuds against The Destroyer. He was so hated by the crowds that the police were regularly brought in to protect him and for riot control. The next year on June 12 he defeated Edouard Carpentier for the WWA World Championship, which he would go on to defend against the likes of Lou Thesz. As champion, he frequently appeared on a young television host’s talk show, making can’t miss television making the host a star. Some guy named Regis Philbin. He also would defend his title and trade it back and forth with notable stars such as Rikidozan, Bearcat Wright, and Dick the Bruiser.

Blassie’s battles with Rikidozan took him to Japan, where he became a notorious figure. The image of Freddie biting Rikidozan’s head, causing the Japanese star to bleed all over himself sent the country’s citizens into an uproar, with documented cases of heart attacks and even some people dying from the terror. Really.

In 1964 Freddie briefly worked for the then-World Wide Wrestling Federation, now the WWE, against their champion Bruno Sammartino and also Bobo Brazil. He returned in 1971 to challenged Pedro Morales for the title as well. He retired from in-ring competition in 1974 and began working as a manager until 1986. During that time he assisted such stars as Blackjack Mulligan, High Chief Peter Maivia, ‘The Crippler’ Ray Stevens, Jesse Ventura, The Iron Sheik, George ‘The Animal’ Steele, Mr Fuji, Hulk Hogan, and even Muhammad Ali in his match against Antonio Inoki. He retired in 1986, but would appear on occasion until his passing in 2003 at the age of 85. He was inducted into the WWE Hall of Fame in 1994.

Beyond the squared circle, he also had, believe it or not, a music career which included the hit ‘Pencil Neck Geek’, from his signature catch phrase that is a standard for Dr. Demento’s radio show. He also appeared in many television shows and movies, such as The Dick Van Dyke Show and opposite Andy Kaufman in ‘My Breakfast with Blassie’. Kaufman’s whole act was inspired by how enamored he was with wrestling heels, especially Blassie. Stop and think about this for a second: Andy Kaufman based his legendary career around Blassie. Regis Philbin became seen as a successful TV host because of Blassie. Part of Dr Demento’s success was due to Blassie, and that show later broke Weird Al Yankovich. How different would the entertainment world be without Blassie’s presence? And all because he portrayed a horrible riot-starting bad guy, almost as a form of catharsis to get away from an abusive childhood. Blassie is proof that even when the deck’s stacked against you, your future is what you make it.

About the piece: My artistic background comes from comic books, which has long been defined stylistically by bold black lines. I’ve done pieces like this on occasion, where I’ll use spray paint to create a mid-tone, even spraying over the black. Then I’ll come in and use the same approach I took with the black, but do it with white. I then put a little more black in for subtlety, and added some lines and shapes with paint marker to ‘class’ it up a bit.