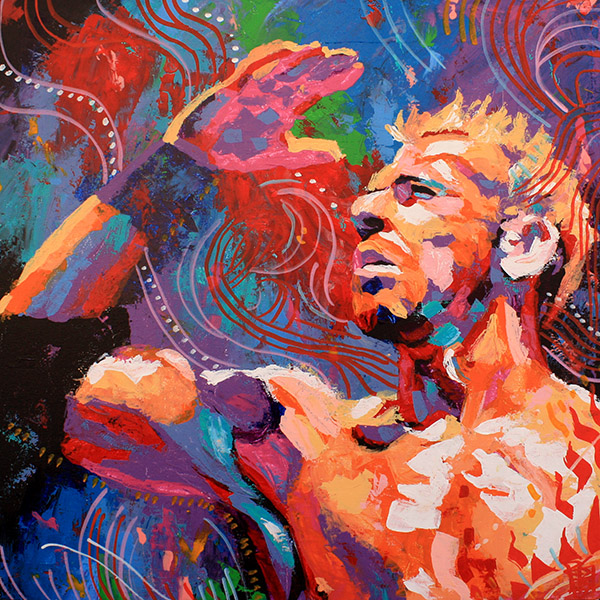 The body of work put together by Christian is proof that effort and determination pay off. William Jason ‘Jay’ Reso was born 1973 in Kitchener, Ontario, Canada, and met his lifelong best friend and tag partner Adam ‘Edge’ Copeland while in primary school. In 1994 he began his wrestling training with the legendary Ron Hutchinson and began working under the name Christian Cage. He worked on the independent scene with Copeland and Rhino, before following Copeland to the World Wrestling Federation after time at Dory Funk, Jr‘s tryout camp. In the WWF he shortened his name to Christian and began a notable tag team partnership with Edge.

The team of Edge and Christian were at the center of arguably the best era for tag team wrestling, at least for the WWF/WWE. They faced off against teams like Matt Hardy and Jeff Hardy as the Hardy Boyz, Bubba Ray and Devon as The Dudley Boyz, John Bradshaw Layfield and Ron Simmons as The Acolytes, Too Cool, the Holly’s, The Rock and The Undertaker, and many more. The duo won the Tag Team Championship together on seven different occasions and were integral in the success of the historic Tables, Ladders, and Chairs matches against the Hardyz and the Dudleys, which rank among the best matches of all time. By 2001 the duo began feuding with one another over the Intercontinental Championship, which Christian won from Edge before losing it back.

Now on his own, Christian defeated Bradshaw for the European Championship before losing it to Diamond Dallas Page. After a program with DDP, Christian partnered with Lance Storm and Test, then later tagged with Chris Jericho. In 2003 he declared himself the new People’s Champion after some advice from The Rock and began referring to the crowd as ‘The Peeps’. He had runs against Booker T and Rob Van Dam before entering into a rivalry with Jericho that saw the two compete at WrestleMania 20. In 2004 he was now referring to himself as Captain Charisma and by the next year had a rivalry with John Cena. Near the end of the year he left the WWE for Total Nonstop Action Wrestling.

In TNA he resumed the name of Christian Cage, and soon defeated Jeff Jarrett for the National Wrestling Alliance World Heavyweight Championship. He went on to defend it against Abyss in a brutal feud before losing to Jarrett in controversial fashion. He also competed against Sting and Rhino, before defeating both Sting and Abyss to regain the NWA World Title. He then had rivalries against Kurt Angle, Samoa Joe, and AJ Styles. After the NWA broke off ties with TNA during Christian’s title reign, the title became TNA’s own World Championship, which he lost to Kurt Angle.

Christian returned to the WWE in 2009, and promptly defeated ECW Champion Jack Swagger. He soon defeated Swagger for the title, and held it until being defeated by Tommy Dreamer, but would soon regain it. He successfully defended it until the beginning of 2010 when he was bested by Ezekiel Jackson. Back on Raw and SmackDown, he competed against Kofi Kingston, Alberto Del Rio, Brodus Clay, and The Big Show, Cody Rhodes, and The Miz. He also had a fantastic program against Randy Orton over the World Heavyweight Championship, which he won and held for a time. During his storied career Christian has held 22 championships between WWE and TNA, including being a six-time World Champion.

About the piece: I wanted to work primarily with a palette knife because, hey, it’s fun, so I did this as an homage to the work of Leroy Neiman, but added some of my own approach with the inclusion of the paint markers to give it a different sort of energy mixing the chaos of the knife with the elegant curves of the marker.