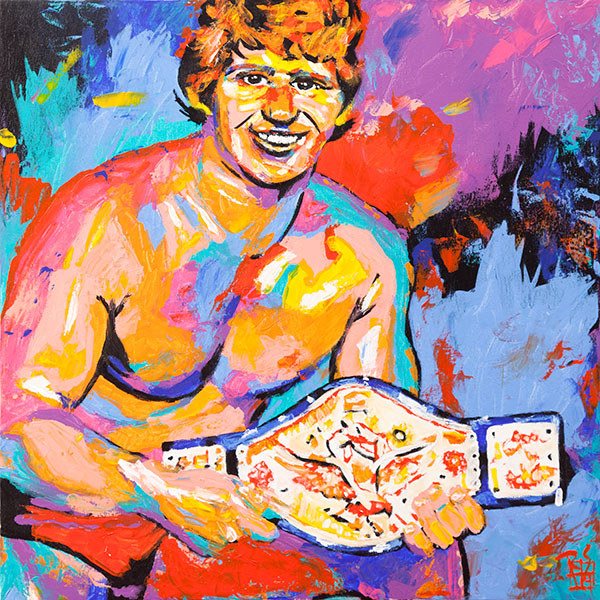 Bob Backlund is proof that a positive mental attitude will take you to the very top. Born in 1949 Minnesota, he was a natural athlete, going on to be an All-American in both football and wrestling during his freshman year at Waldorf Junior College, before winning the Division II NCAA Championship in 1971 and placed fifth in the 1972 heavyweight division. He then transitioned into pro wrestling, first in the American Wrestling Association and then touring the National Wrestling Alliance’s territories, having notable matches with Terry Funk, Jack Brisco and Harley Race and gaining tag gold with Gerald Brisco.

In 1977 he joined the then-World Wide Wrestling Federation, now the WWE, and quickly entered the main event scene facing off against champion “Superstar” Billy Graham. In early 1978 he finally defeated Graham for the WWWF Championship and would hold the title longer than anyone except Bruno Sammartino. During this time he faced off against World Champions from other organizations, such as Harley Race, Ric Flair, Nick Bockwinkel, Antonio Inoki and Billy Robinson, either soundly defeating them or going the distance to the time-limit draw. His untouchable in-ring skills consistently brought fans into the venues, to see this “Howdy Doody”-looking young man destroy all challengers. He finally lost the title to The Iron Sheik at the end of 1983 in a controversial match. He quietly left the company the next year.

During the next eight years he was largely semi-retired, having sporadic matches with Rick Martel, Ivan Koloff and others. In 1992 he returned to WWE to challenge champion Bret Hart in an old school/new school rivalry where Backlund ultimately defeated Bret for the WWF Heavyweight Championship in a rather incredible moment. He lost the title days later to Kevin “Diesel” Nash in a match that Nash still claims as the moment that made him due to Backlund’s selling of his jackknife powerbomb finisher. Though Bob would sporadically compete for WWE and later Total Nonstop Action Wrestling, his off-the-wall promos became what he was known for with modern fans. He was inducted into the WWE Hall of Fame in 2013.

About the piece: This was commissioned by WWE to be a part of their WrestleMania XXX Axxess memorabilia display, which is a huge honor. Due to the time-period Backlund had his first title run, I opted to do this in a Leroy Neiman-inspired approach largely all with a palette knife. Bob set up a table next to my display at Axxess and we talked quite a bit over the week. He was truly inspiring to watch interact with the fans, giving each and every one of them a moment and talking about the power of having a positive mental attitude, even signing all of his pictures with “P.M.A.” Just one of many amazing memories from that week.